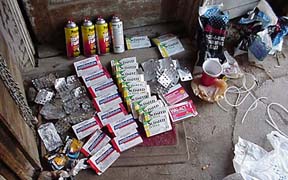 Illegal drug manufacturing involves clandestine chemistry. What is clandestine chemistry? It is chemistry carried out in secret, and particularly in illegal drug laboratories. Larger labs are usually run by gangs or organized crime with the intent of large scale illegal drug manufacturing for distribution on the black market. Smaller labs are often run by individual chemists working clandestinely on illegal drug manufacturing in smaller amounts for sale to low level drug dealers and addicts.
Illegal Drug Manufacturing: History
Ancient forms of illegal drug manufacturing included the manufacturing of poisons. Another old form of clandestine chemistry and illegal drug manufacturing is the illegal brewing and distillation of alcohol. This is frequently done to avoid taxation on spirits. From 1919 to 1933, the United States prohibited the sale, manufacture, or transportation of alcoholic beverages. This opened a door for brewers to supply their own town with alcohol. Just like modern-day drug labs, distilleries were placed in rural areas. The term moonshine generally referred to "corn whiskey", that is, a whiskey-like liquor made from corn. Today, American-made corn whiskey can be labeled or sold under that name, or as Bourbon or Tennessee whiskey, depending on the details of the production process.
Illegal Drug Manufacturing: Precursor chemicals
Prepared substances (as opposed to those that occur naturally in a consumable form, such as cannabis and hallucinogenic mushrooms) require reagents. Some drugs, like cocaine and morphine, are extracted from plant sources and refined with aid of chemicals. Semi-synthetic drugs such as heroin are made starting from alkaloids extracted from plant sources which are the precursors for further synthesis. In the case of heroin, a mixture of alkaloids is extracted from the opium poppy (Papaver somniferum) by placing small incisions in its bulb. A milky fluid bleeds out of the incisions which is then left to dry out and scraped off the bulbs, yielding raw opium. Morphine, one of many alkaloids in opium is then extracted out of the opium by precipitation and turned into heroin by heating it with acetic anhydride for several hours.
Illegal drug manufacturing of other drugs (such as methamphetamine and MDMA) are normally made from commercially available chemicals, though both can also be made from naturally occurring precursors. Methamphetamine is also sometimes made from ephedrine, one of the naturally occurring alkaloids in ephedra (Ephedra sinica). MDMA can be made from safrole, the major constituent of several etheric oils like sassafras and brown camphor oil. Governments have adopted a strategy of chemical control as part of their overall drug control and enforcement plans. Chemical control offers a means of attacking illegal drug manufacturing and disrupting the process before the drugs have entered the market.
Because many legitimate industrial chemicals are also necessary in the processing and synthesis of most illicitly produced drugs, preventing the diversion of these chemicals from legitimate commerce to illegal drug manufacturing is a difficult job. Governments often place restrictions on the purchase of large quantities of chemicals that can be used in the production of illicit drugs, usually requiring licenses or permits to ensure that the purchaser has a legitimate need for them. Furthermore, since so many chemicals listed as illicit drug precursors are manufactured all over the world, international cooperation combined with a comprehensive chemical control strategy is essential for chemical control policies to succeed in stopping illegal drug manufacturing.